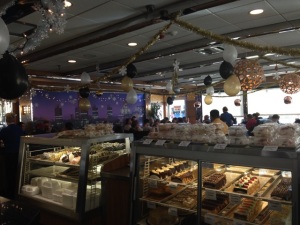 This morning, we woke from our New Year’s Eve comas and met some of Matt’s relatives at the Capital City Diner. Previously known as Metro 20, the diner is under new ownership. It’s set in the picturesque town of Albany and located on Western Ave. Capital City Diner is one of the those places that looks unassuming from the outside but transforms into a magical Narnia when you walk in. As you 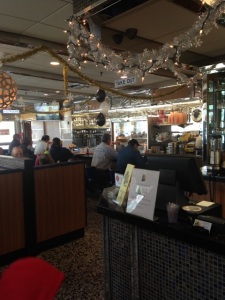 can see from the photo on the left, there were balloons and tinsel everywhere, like they were expecting our party of nine. (I didn’t even have that many balloons at my 5th birthday party. What the hell, Mom and Dad? Step up your balloon game.)

We called ahead to see what the wait time was like, and though we were told 20-30 minutes, we arrived 5 minutes later and they were already pulling tables together for us… a New Year’s miracle! Another New Year’s miracle was seeing the array of incredible-looking desserts and being able to stop myself from ordering a Napoleon or giant cream puff or a black and white cookie the size of my face. Capital City doesn’t mess around when it comes to desserts, their collection of sugary options is legit. 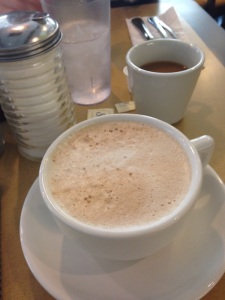 We immediately noticed the wide selection on the menu, which definitely rivals most of the other diners we’ve been to thus far. I didn’t take a photo of it because I was too busy being overwhelmed by options. Capital City has everything from a coconut shrimp appetizer to po’ boys, from half-pound Angus burgers to breakfast sandwiches with farm-fresh eggs. I almost wanted to give those farm-fresh eggs a whirl, but Matt and I were both craving traditional lunch foods. And caffeine. Matt got the coffee and rated it a 3 out of 5. I ordered a caramel cappuccino, and rated it a 4 out of 5. It wasn’t bitter as I had been expecting, and wasn’t too sugary either. 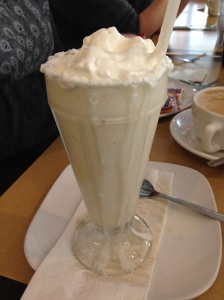 For lunch, Matt ordered a vanilla milkshake and a barbeque bacon Angus burger with french fries. The fries were “beautiful, crispy, golden-brown wedges of deliciousness” according to Matt. I ordered the French onion soup and a turkey club, which didn’t have enough mayo on it but satisfied my desire for something that combines turkey and bacon. It came with fries or potato salad, and I foolishly ordered the potato salad. I mean, it was really good potato salad, but those fries, man, those fries. We both agreed, the food was a 3 overall, but the fries were a 5. I’m calling them Geena Davis fries, because they’re in a league of their own.

The waitress who took care of our table was very attentive and brought us some stainless steel coffee pots without us even asking, so we could have as much 3 out of 5 coffee as we desired. That reminds me, the water. It was good, I wanted to rate it a 4, but Matt argued for a 3 because apparently he has a more discerning palate than I do.

The dinerness rating of Capital City Diner is a 4. It’s got chrome for days, plenty of stool seating at the counter, desserts baked on premises and displayed beautifully, and wait staff that may or may not have worked there for decades. There’s an Albany mural on one wall and mirrors everywhere, plus a lot of patrons who seemed like they probably went there at least once a week. However, it doesn’t look anything like an old dining car, so it can’t have a perfect dinerness score.

Capital City Diner is definitely a great place, and we’d go back if we didn’t have a couple hundred more diners in the Upstate NY area to visit.