Like Lil’ Kim, we been gone for a minute now we’re back with the jump off.

This weekend, we hit up 87 North and ended up on the main drag in Queensbury, NY, about an hour north of Albany. Located on bustling Main Street, Kerrie’s Northway Diner is an unassuming place that has more character and space inside than you’d think. 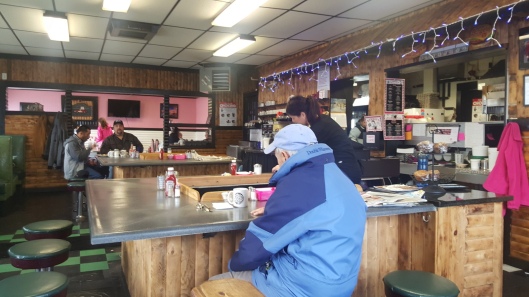 The unconventional counters looked like repurposed hibachi grills. Come to think of it, we haven’t been out for hibachi or sushi in a while. Maybe that’s what we’ll have tonight.

It was a “seat yourself” situation, so we nabbed a booth by the window, and had some time to take in the ambiance while we waited for our coffees and waters. Half of the interior is all wood everything, which made me feel like we were in a cabin by a lake instead of a diner, and the other half looks like a 1950s diner with black and white checkered floor tiles and pink walls. The booths were rigid like a church pew but more comfortable (no Bibles and my mom wasn’t there telling me to sit up straight), and the Formica tables were at a comfortable height for dining, with plenty of leg room. There was a fridge next to the entrance, which we initially thought was just for decor but was actually functional. The place wasn’t super packed, and a lot of the regulars there were older gentlemen who spoke to each other about their blood sugar levels and who the best heart doctors are in the area.

On the walls of Northway Diner were scattered framed photos, some of family members and some of Marilyn Monroe. Frankie Valli & the Four Seasons played on a radio in the background, and we watched a lumberjack competition on the small TV in the corner for a few minutes while deciding what we wanted for brunch.

The breakfast part of the menu.

We got our coffee, which was smooth and full bodied, and which we rate a 4 out of 5. The water was alright, not the best we’ve ever had, so we rated it a 3. Maybe it was the water, maybe the cups, but it had a sink taste that always knocks off a rating point or two for us.

I ordered a broccoli, sausage and Swiss cheese omelette with wheat toast, while Matt ordered a jalapeno, cheddar cheese and sausage omelette with a bagel. Buffalo chicken soup was a special of the day, so Matt decided to give it a shot.

Buffalo chicken soup with the only oyster cracker brand worth eating.

The soup was not that great, as the texture and taste suggested it came from a giant plastic bag–definitely not homemade. It’s a good lesson to learn – always ask your server if the soup is homemade or heated up in a bag. It will save you heartache and pouting.

The rest of our food came out; the homefries were hearty and a cooked on the grill, which was a welcome reprieve from some of the diners we’ve visited that fry the hell out of tiny potato pieces and drown it in salt. The toast was tasty and the bagel was good, it tasted like it had been toasted on a grill, which in this case in not a bad thing. The omelettes were good but could have been fluffier.

Overall, we rate the food a 3.5, as it’s a little better than average and pretty filling. The service at this family-owned diner is a 5, as the waitress was friendly and constantly checking to make sure we had everything we needed.

Kerrie’s Northway Diner is a great place to stop if you’re looking for a local mom-and-pop with good food, friendly service and a small town atmosphere. You get filling food at a good price and it’s not a bad way to spend a weekend morning. 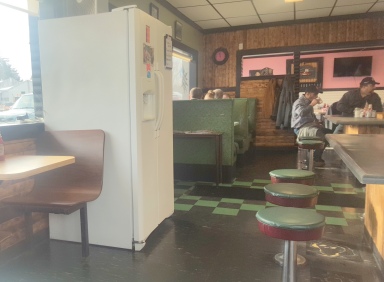 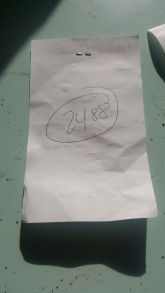 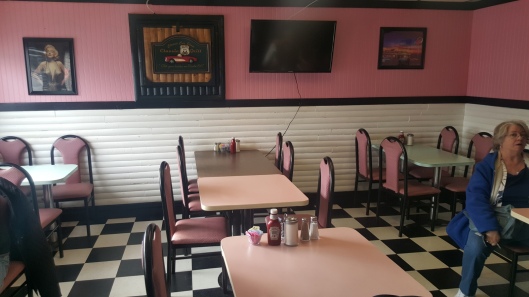 Miss Monroe on the left and a wary patron on the right.