Ah, Albany. The center of the ol’ 518. It plays host to a myriad of entertainment venues, nightlife for all ages, niche restaurants, and the Pearl Street Diner. 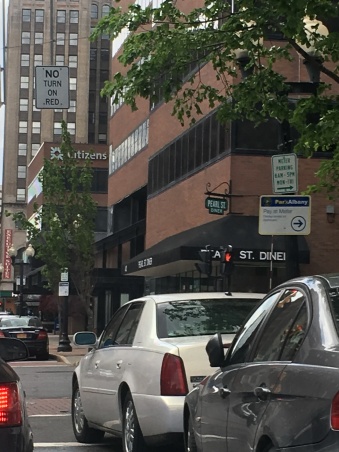 Looking like a modern Edward Hopper painting, the Pearl Street Diner has large, neon-green-lighted windows abutting the wind tunnel that is downtown Albany. We walked through the entrance, shared with other businesses in the same building, and had a look at the sandwich board full of specials. 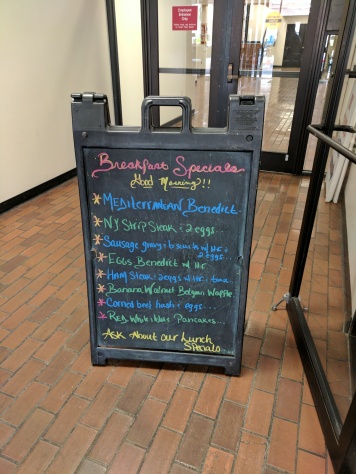 The menus were not much more detailed, with a small selection of typical diner fare that included sandwiches, salads, breakfast fare and soft drinks. There were only two other tables of patrons–it was noon on Sunday in downtown Albany, which was not encouraging. We sat down at a booth against the windows, which became a form of entertainment when we got to watch everyone walking down the street Mortal Kombat-ing with the wind. 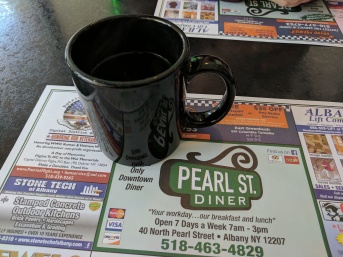 While we reviewed the menus, we ordered a coffee and water as per usual, and I decided to get an omelette. Matt wanted a turkey club and a good experience, so he ordered the former hoping for the latter. Our waitress, who was nice, assured us that the sandwich meats were roasted in-house, which got us excited for the quality of the rest of the meal. The waitress took our orders and we tasted the coffee and water. The coffee tasted old, dirty and overly rich–basically the Hugh Hefner of coffee. We rated it a 1 out of 5. The perfectly average municipal water was a 3. 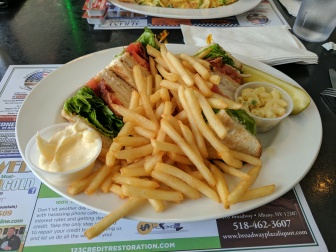 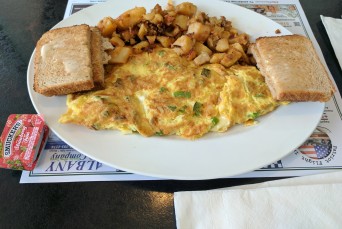 We got our meals about ten minutes after ordering, and they looked really good. The waitress was prompt in bringing us additional napkins and an extra plate for ketchup. Having not had much of anything to eat earlier in the day, we dug in. I had the wheat toast, which was your average run-of-the-mill bread from the grocery store, and Matt tasted the fries, which reminded him of McDonald’s fries without all the extra grease. Next I had my Swiss, onion and pepper omelette, which was super cheesy and pretty delicious. The home fries tasted old and sad, and salty, so I didn’t eat most of them. The turkey club was barely average, but the pickle was on point. Overall, we rated the food a 3, as parts of the meals were good but in the entirety were just average. 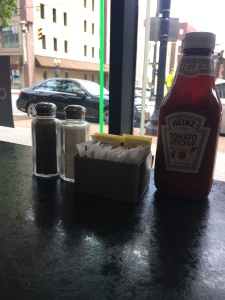 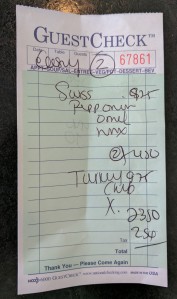 We got a handwritten check (check it out!) and the cost of our food was average for two people ordering breakfast at noon on a Sunday. The service was slightly above average, rated a 4.

Even though it’s in a weird building, which affects its dinerness score, the Pearl Street Diner has a black and white checkerboard floor, chrome chairs, a retro aesthetic and framed photos on the walls that shoutout the area’s history. The dinerness rating is a 2 since some of the decor is what it should be, but the rest of dinerness qualifying factors — old train car, ancient wait staff, jukebox or old timey music, extensive chrome and mirrors — were severely lacking. There were only 4 stool-chairs at the “lunch counter” and the diner looks like it could very well have been a pizza place in its past life. The kitchen is open enough that you can watch your food being prepared if you’re into that sort of thing. Which, I hope for the sake of the staff, you’re not. 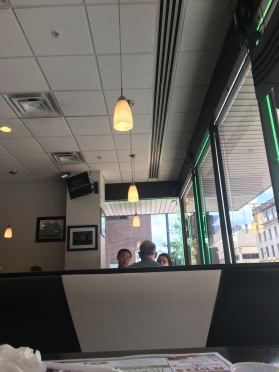 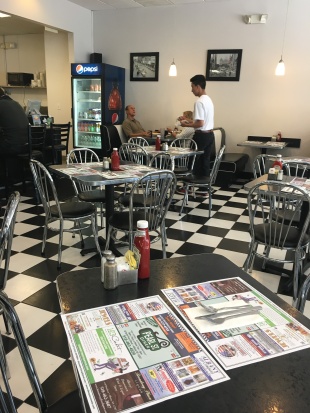 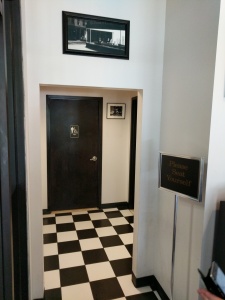 The best part of the experience, believe it or not, was the parking! We scored a sweet spot right outside the diner, which was entirely baffling since parking in Albany is usually a nightmare.

Overall, a less-than-satisfactory experience with our diner adventure this weekend. But it’s all a part of our journey to visit diners all around us.