Where the mouth of the Mohawk joins the Hudson is the small Upstate NY city Cohoes. Tucked away on Ontario Street is Uncle John’s Diner, where cash is the currency and real food is prepared. Sitting down at Uncle John’s, one might be reminded of the 1997 Tracy Byrd hit, “I’m From The Country:”

Ev’rybody knows ev’rybody,
Ev’rybody calls you ‘friend,’
You don’t need an invitation
Kick off your shoes, come on in. 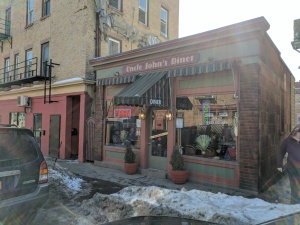 It was the smallest diner we’ve ever seen. Regular patrons greeted each other, and carried on conversations with each other from one side of the 25-foot-wide room to the other. There were 18 seats total – eight counter stools and five 2-tops. One of the things I noticed immediately, because I am my mother’s daughter, is how clean the ceiling fan was.

Uncle John’s does breakfast only, so if you’re looking for lunch, you’re out of luck. We were greeted by a pleasant waitress and not handed menus because, as it turns out, the menu was on chalkboard signs on the walls and above the counter.

The menu was pretty basic, you could get any combination of eggs, American cheese,

rye/wheat/white toast, bacon, ham, sausage, peppers, onions, or home fried potatoes. Our disappointment at the surprisingly small menu faded when we realized that all of the food at Uncle John’s Diner is served fresh. We saw bags of potatoes behind the counter, plus freshly-diced peppers and onions, and stacks of fresh eggs. They’re a cash-only establishment, so stop at the ATM on your way there, fellow card-only-bringers.

As always, we started out with coffee and water. The coffee was freshly brewed, though watery and bland. We were given a cold Byrne Dairy half and half for creamer, and this is likely the only time I’ve had a fresh creamer at a diner. So coffee is a 3 out of 5, but the creamer (which we’ve never bothered to rate before) was a 5!

The water was perfect, a 5 out of 5–and I knew this before even sipping it. 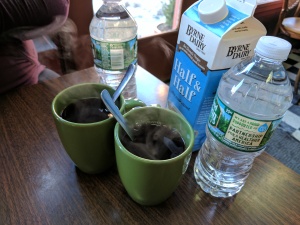 We ordered omelettes with peppers and onions, while our buddy Tim got a couple eggs over medium, with bacon, toast, and home fried potatoes. The two waitresses made sure we had coffee refills as often as we wanted, and the chef running the show in the back made our food in about 15 minutes. 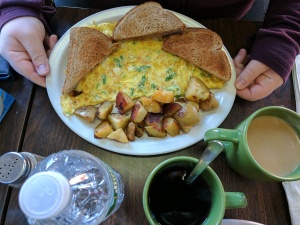 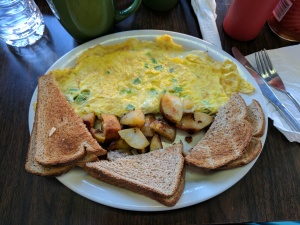 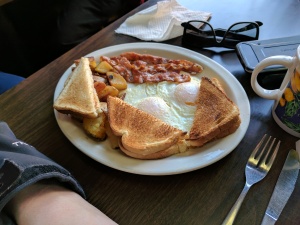 The food overall was really good (a 4 out of 5), and we appreciated that everything was cooked fresh and was real. No egg substitute used here! Definitely some of the best potatoes we’ve had in a long time. There aren’t many choices at Uncle John’s Diner, but what they do have, they make well. The atmosphere was nice, and the temperature was comfortable, although the seats were super uncomfortable. Service was prompt, we give it a 4 out of 5. As for the dinerness of the place, it’s a 4 out of 5. There was enough chrome to line a truck bed, and regulars who all knew each other. 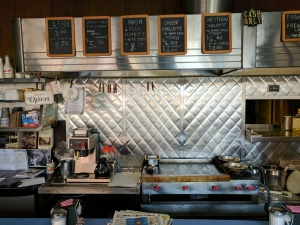 Just don’t look up, you’ll think you’re in a dentist’s office for a hot second.

Uncle John’s Diner is a big fan of the city of Cohoes, with historical photos on the walls and history books about the city propped up against the wall behind the counter. It’s a great stop if you’re in Cohoes before noon on a weekend and want to catch a quick meal. It wasn’t crowded when we stopped in, and we had a good meal at a very low price. 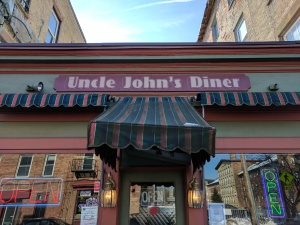 If you have been to Uncle John’s Diner or plan to go there, what’s your take? You can comment below or share your thoughts with us on Facebook.